Posted on February 13, 2018 by ianandjanesadventurebeforedementia

Lima was founded by Francisco Pizarro, the conquistador who defeated the forces of the Inca Empire and delivered South America to Spain. Callao was formed by Spanish colonists in 1537 and soon became the main port in the Pacific for Spanish traffic with virtually all goods produced in Peru, Bolivia and Argentina being carried over the Andes by mule to Callao, to be shipped to Panama, carried overland and then transported to Spain via Cuba. 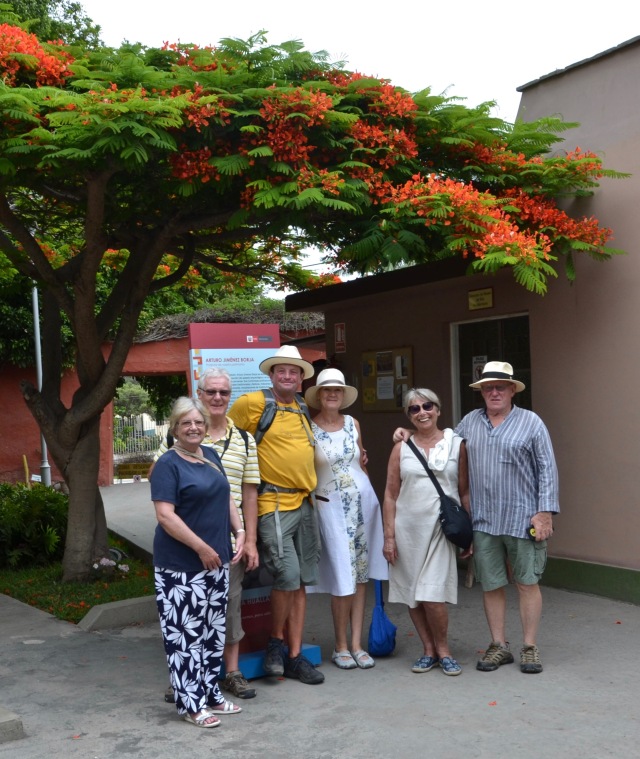 Our first destination today was the pre-Inca temple at Huaca Huallamarca, this was a short walk from the nearby shopping centre where the shuttle bus had dropped us off. The girls were only too pleased to miss out on shopping in favour of seeing a bit of culture.

It’s amazing that all this was made from mud; it’s just as well it doesn’t rain very often in Lima! 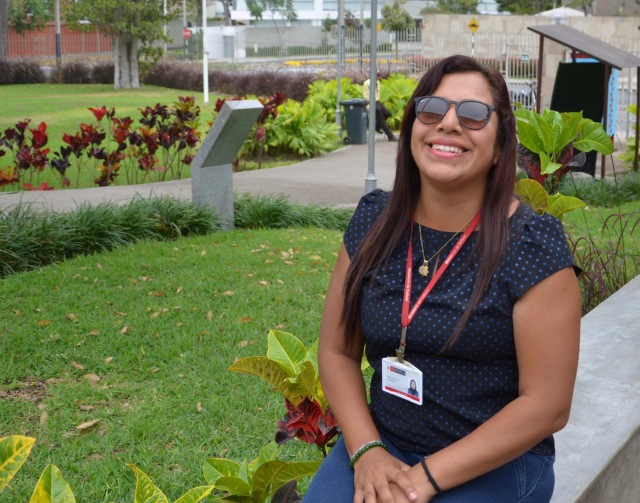 This is a photo of the lovely guide at the temple. She was so proud and pleased to be able to convey her passion about her country and its history to us interested visitors.

After our temple visit, our next destination was the centre of old town Lima. We made our way to the bus stop where a collectivo (a kind of shared taxi) stopped, and Kevin negotiated the fare of 10sol (about £2.50) for the 30 minute ride into town!  Although there are traffic lights they also have traffic cops pointing the way to go.

This is the Plaza Mayor where you can find the Archbishops Palace, the Government Palace and the Cathedral amongst many other spectacular colonial buildings.

Jane, Kev and Val didn’t know which to look at first!

I’m not sure if it was for our benefit but there was an extremely large police presence in the city, especially around the main square. 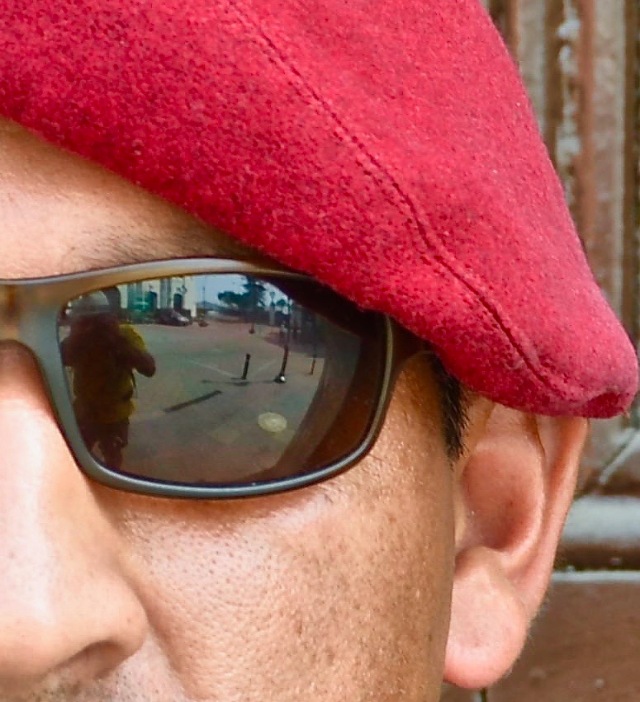 I took a lot more photos today trying to catch that special shot that I could enter for the on-board photo competition. 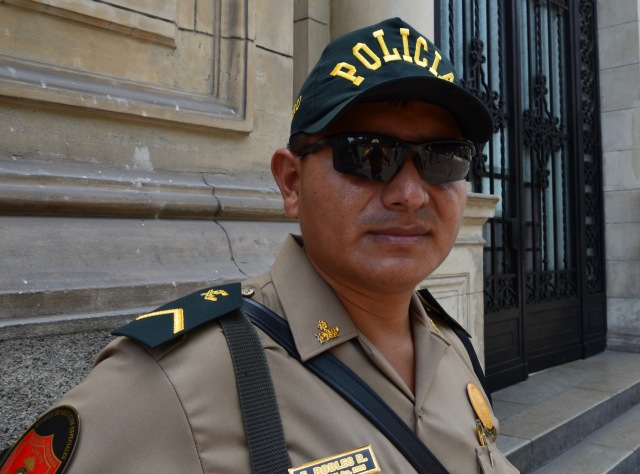 I did ask the policemen before taking a picture, I didn’t want to end up in a Peruvian jail!

They had to send in reinforcements when they heard Kev was in town!

Some of the local shops left a lot to be desired, but Jane and Val were still keen to go in! 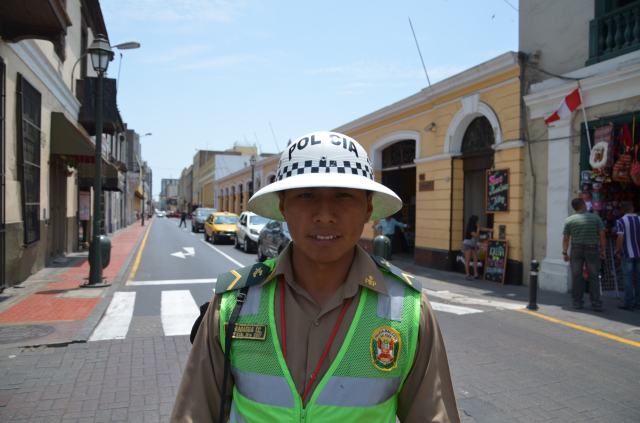 Another policeman happy to pose for a picture. 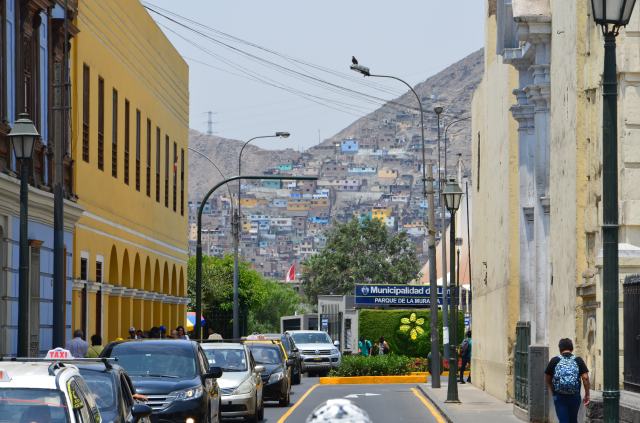 Not far from the city centre you can see the run down shacks in the hills.

The contrast between rich and poor is all so very easy to see!

This chap seemed to be enjoying his Saturday afternoon, waiting for his young lady to turn up…………..

However this young lady seemed a bit fed up waiting for her young man!

This sign put a smile on Janes face!  Pisco sour is a traditional South American drink. 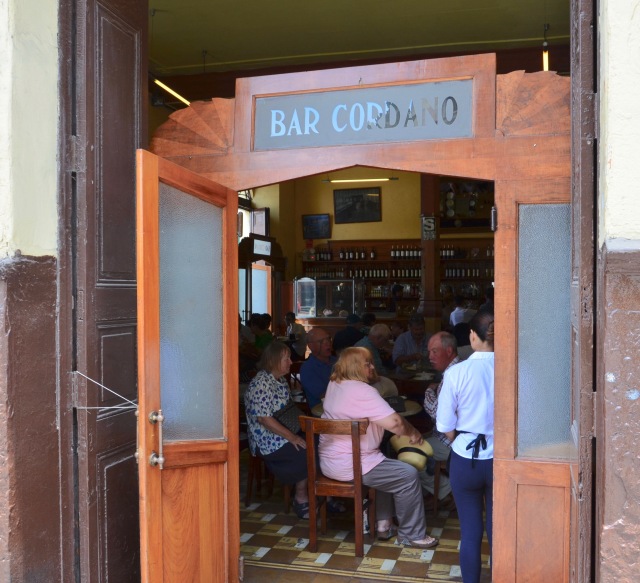 In this bar however, there was no free pisco tasting and we had to pay for  it.  The cheek of it! 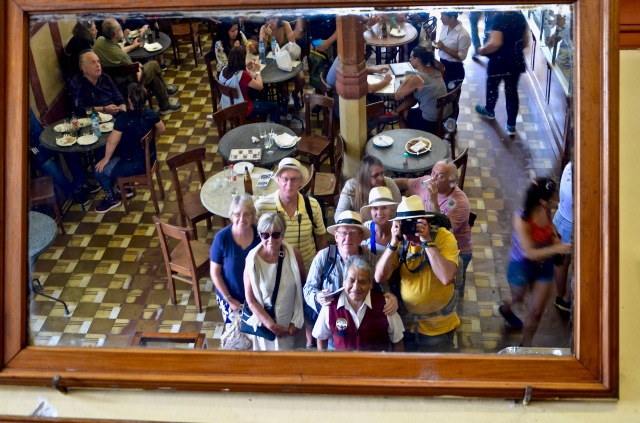 We stopped for lunch in this old fashioned bar.

And the ham rolls were superb!  I was amazed at how much ham you can put in one roll………. lovely! 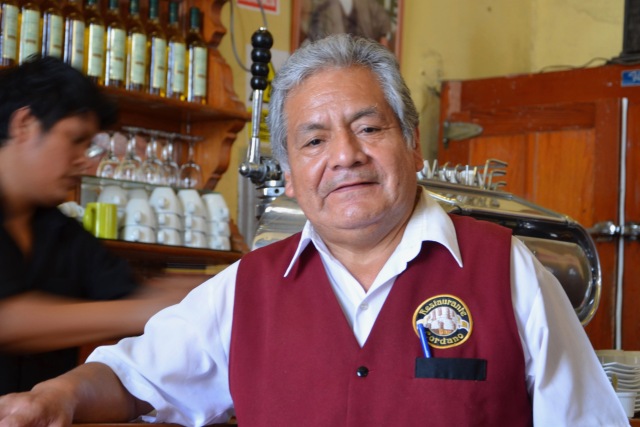 The owner of this fine establishment was rightfully very proud.

We saw a lot of these trikes around town , quite an efficient way of moving goods.

At the end of the day there is nothing better than to watch the sun as it gently disappears behind the containers on the docks…….

Right then it must be time for dinner!