On The Way to Delhi

Posted on March 3, 2019 by ianandjanesadventurebeforedementia

The flight from Heathrow to Dubai was excellent, I have never flown with Emirates Airlines before but I would certainly recommend them. The crew were all very friendly and attentive. I had booked seats with extra leg room and we found ourselves right at the very front of the plane right by the one of the doorways on to the plane (there are more than one on this plane, it being an airbus A380 they have an upstairs where you have your own “cabins”), and during takeoff the chief cabin steward sat opposite us. Whilst he prepared for the flight he could see all around the aircraft, inside and out by checking the various CCTVs that they had. One of these cameras was a pilot’s eye view and as we took off it felt like we were doing the flying!

The flight was about 7 hours.  We took off at 10pm and it seemed very odd to see the sun coming up after only a very few hours.

Thankfully on arrival we were upgraded to a coach transfer to the hotel, unlike this poor chap but I suppose at least he had room to sleep! Once you leave the airport you are truly not prepared for the full frontal assault on all your senses. The sights , the sounds and the smells are mind-blowing. The drive to the hotel was fantastic, I have never been on a theme park ride that has been more exciting, you really don’t know which way to look. Your heart is in your mouth as you go around a roundabout to find a bicycle coming straight at you in the opposite direction!! 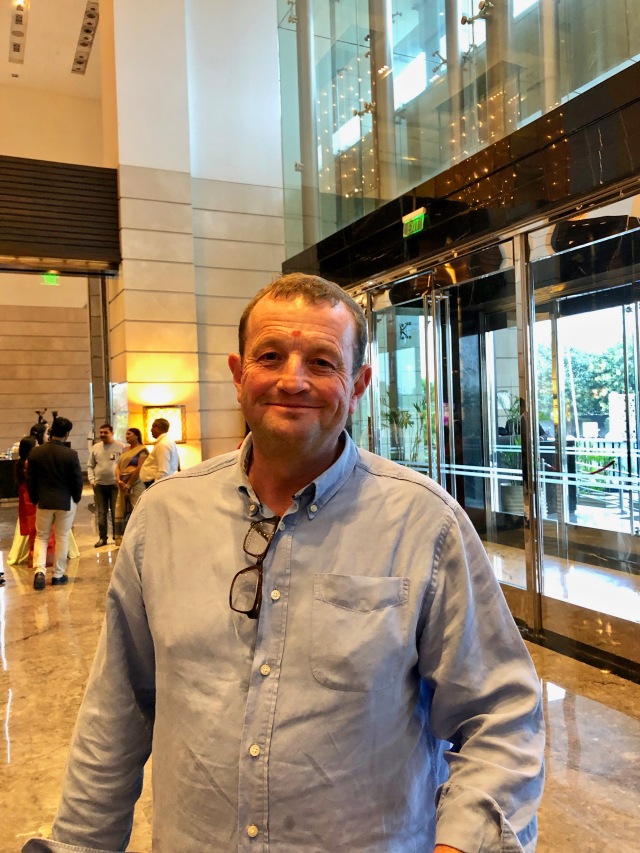 After safely arriving at the hotel we were greeted with “namaste” the traditional Indian salutation used at any time of the day which means “I bow to the divine in you”. I also got a “bindi” on my forehead which represents the opening of the third eye.  Its placement was a bit annoying because that is exactly the spot where Jane pokes me when encouraging me to get on with something!

The view from our hotel room in the early evening as the sun goes down on a very interesting but tiring day! 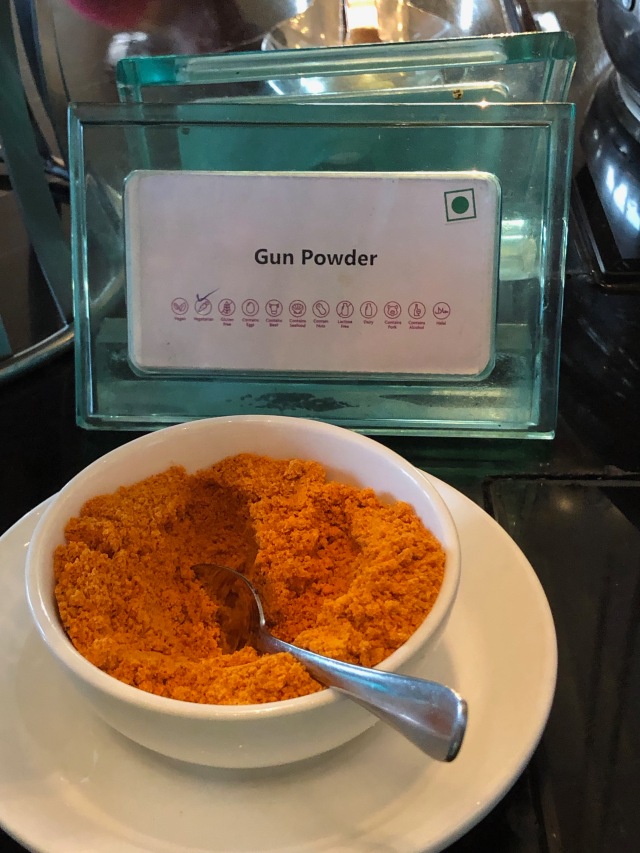 An early start as we have a lot to see today. Not quite sure what this breakfast offering was so I stuck to an omelette!

The first stop on our tour of Delhi was Jama Masjid which is one of the largest mosques in India. It was built by Mughal Emperor Shah Jahan between 1644 and 1656 at a cost of 1 million rupees. 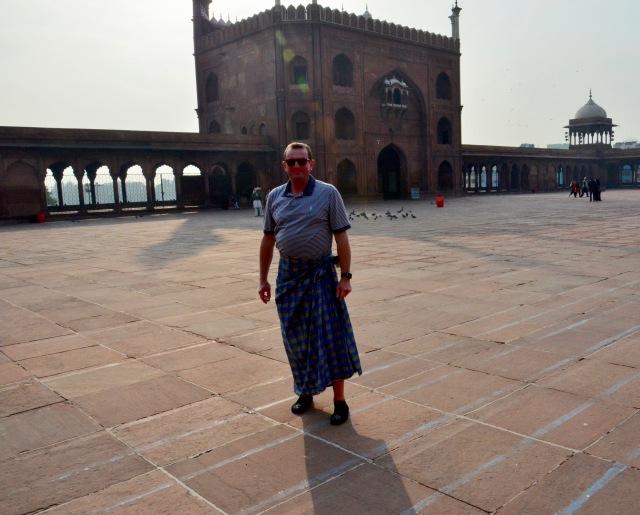 Men have to cover up their legs when entering the grounds as a mark of respect…….I think I carried off the look very well if I do say so myself!

Mind you I do think the ladies looked far more elegant!

It was a quiet place to sit and reflect………quiet literally in this case!

It’s amazing to think that this lovely building was constructed all those years ago.

The colours worn by the visitors added to the vibrancy of the place.

Next stop on the tour was a visit to Raj Ghat, the memorial to Gandhi………. 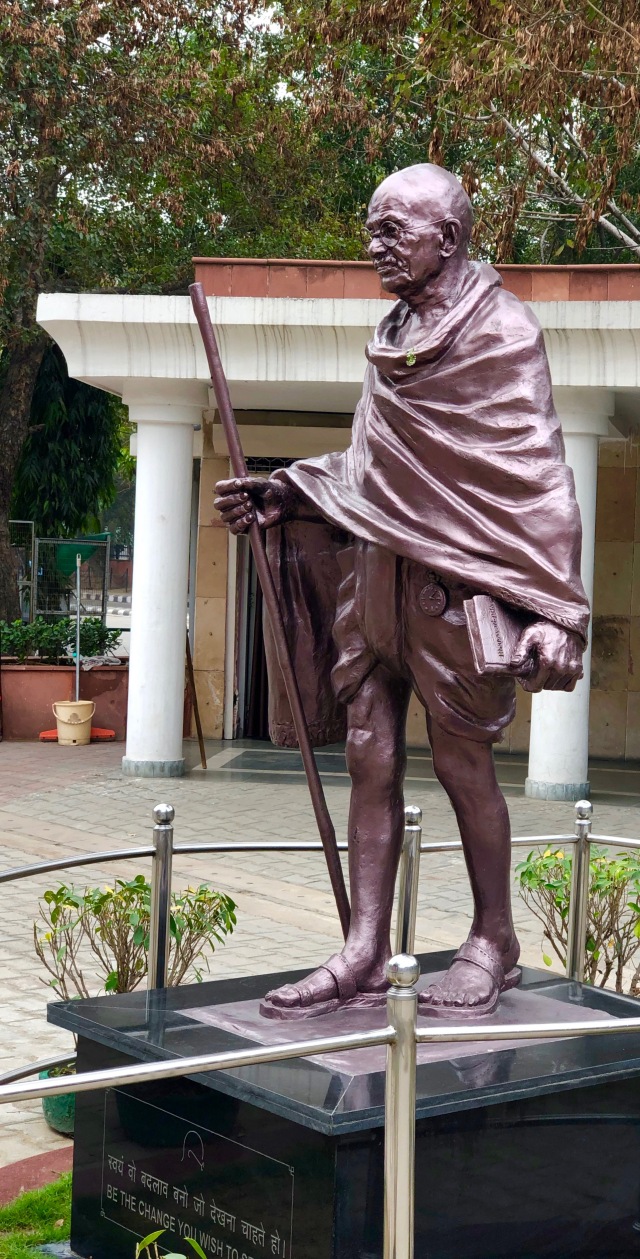 And as Trigger said “you don’t hear much of him these days, he made one great film and that was it!” 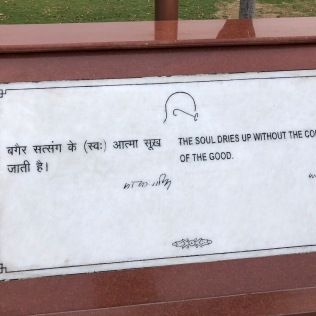 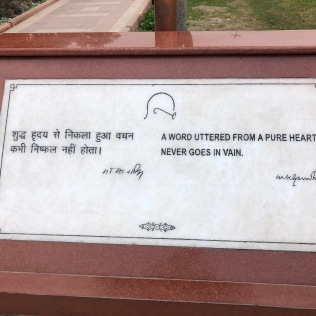 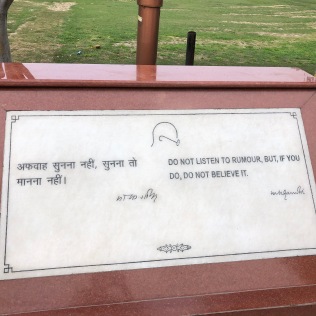 Mind you he did say some wise words and help build a nation!

This is only half of the first day.  The rest will follow when I get a better Internet connection.

4 Responses to On The Way to Delhi