Posted on April 10, 2019 by ianandjanesadventurebeforedementia

The face you first see when you arrive at Muscat in Oman is that of Qaboos bin Said al Said who is the current Sultan of the Sultanate of Oman. You can tell by the size of the cars and coaches in this photo that the mural on the wall is absolutely HUGE! He is obviously not a shy and retiring leader and this is one of many images that can be seen around the city of Oman.

Oman is one of the most conservative of the UAE states, you won’t see any of the high rise buildings that are prevalent in Dubai. Old and new seem to blend quite comfortably together………..

Dhows, cruise liners and navy ships are all on view in the main port, as are small fishing boats. 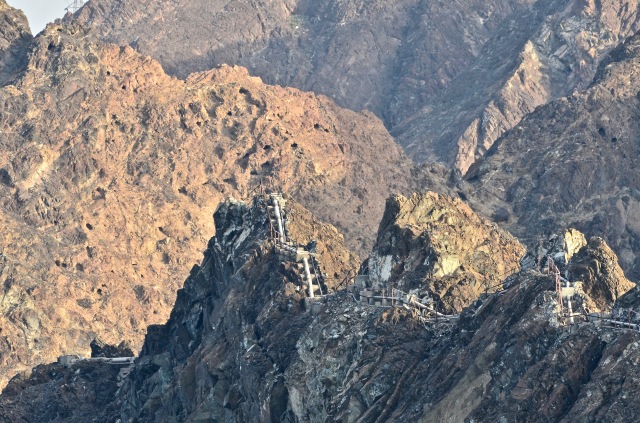 While on the ship you really notice the dry rocky hills that hug the coastline………..

… and new, like this one perched up high with a lovely view of the bay below!

These forts are strategically placed along the coast to safeguard the port.  I wouldn’t want to climb these steps during the heat of the day! 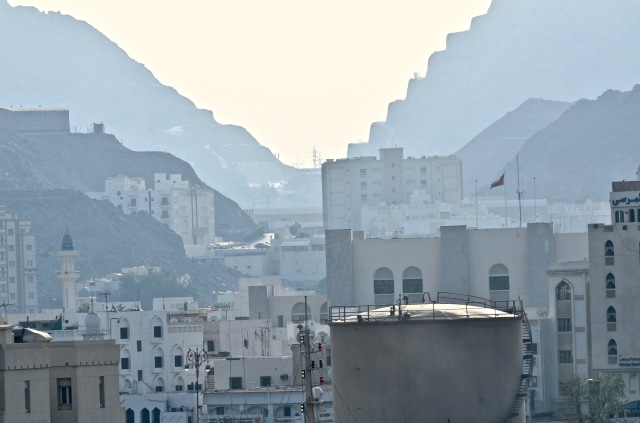 The city is all at low level and in my view this makes it far more attractive a place to visit than that of its neighbour Dubai.

The infrastructure that we got to see was all top notch, modern and clean and tidy. Apparently it is illegal to have a dirty car in Oman, there is a fine but generally you are let off if you clean it immediately! 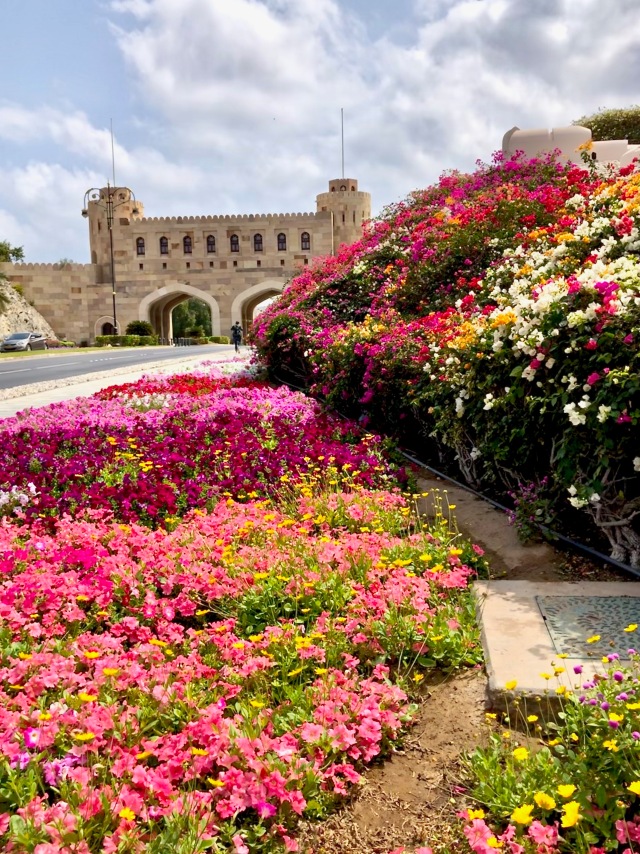 Colourful flowerbeds are prevalent in the city and add a well-needed touch of brightness to the greyness of the rocks and the whitewashed walls of the buildings. 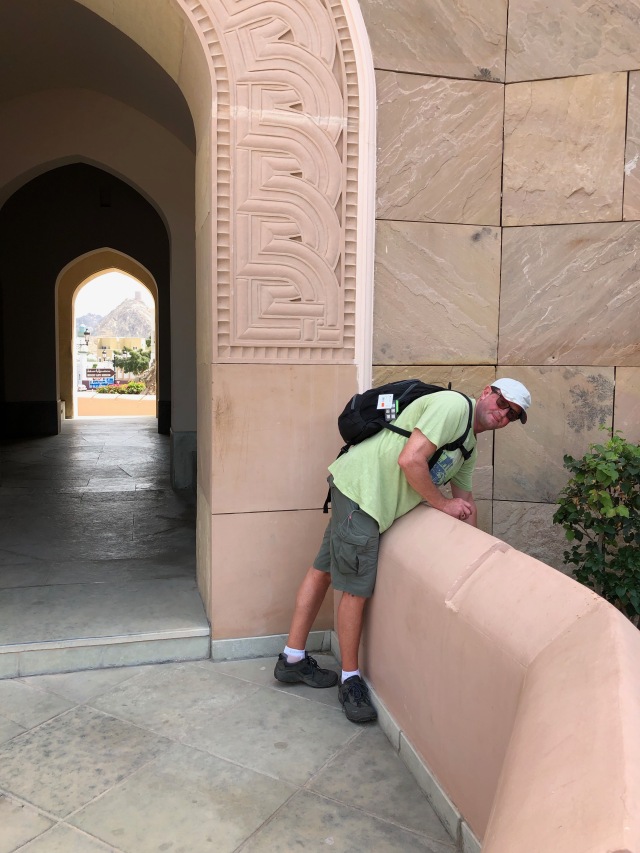 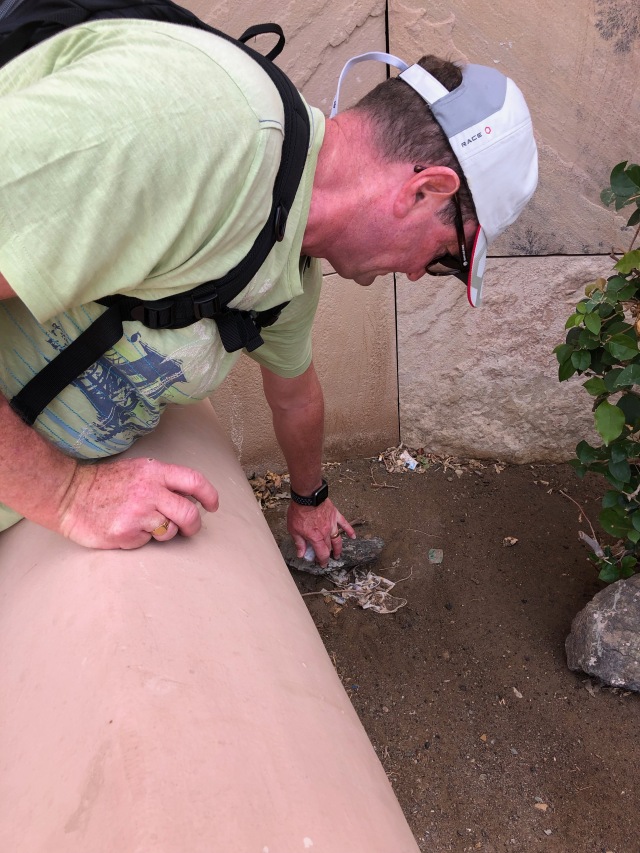 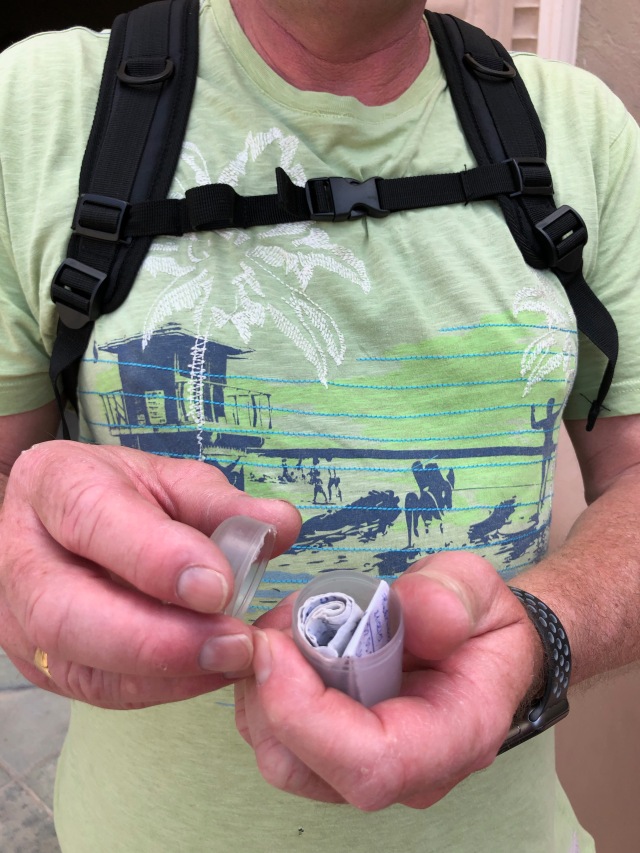 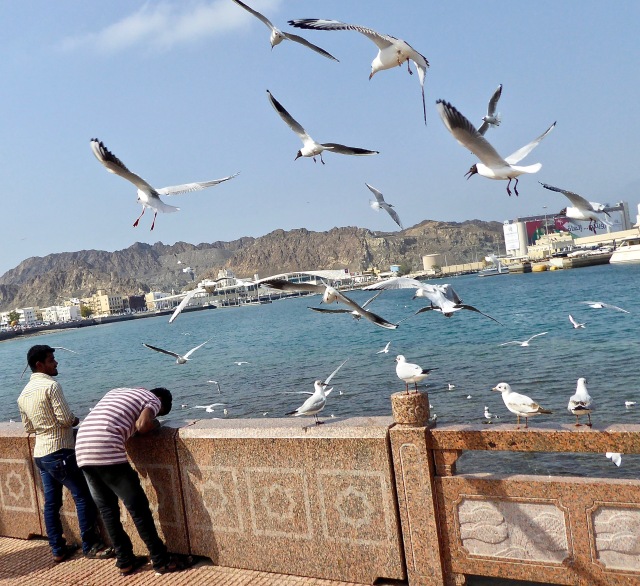 Followed by a very pleasant walk beside the sea back to the ship.

Apparently feeding  seagulls and other small birds and animals is an act of karma, “Spread wheat on the tops of mountains so it cannot be said that a bird went hungry in the land of muslims…..Just a reminder to have respect for all. Even the smallest deeds could be our saving grace!”  Umayyad calph Umar bin Abulaziz

After our long walk it was time for a drink.  Jane wanted her normal glass of dry rose but this wasn’t to be as Oman is a dry country, so no alcohol can be sold from bars.  You can apply for a licence to buy alcohol for consumption at home, but Jane thought on this occasion it would be too much trouble, and she settled for a milkshake whilst I had a delicious blend of fresh fruit juices! 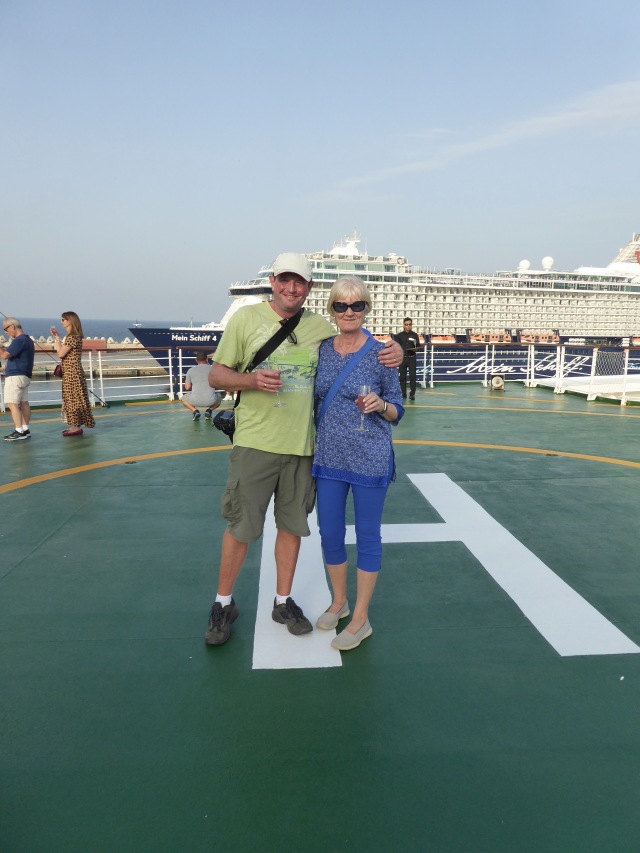 But good news was at hand as when we got back onboard we found that we had been invited for cocktails on the helipad as we sailed away from Muscat…..

We got a prime position right at the very front of the ship as we left the port.  Jane wanted to reenact that scene from Titanic, but surprisingly enough I was too shy to indulge her…… as if!

The officers who were there to greet us were a little more extravert………….

So off we sailed in to the sunset.  I wonder what tomorrow will bring?