Posted on April 25, 2019 by ianandjanesadventurebeforedementia

“Welcome to Mumbai” the sign on the wall that we see from the ship says, “who on earth is going to get their photo taken there?” I wondered.

Oh well, might as well while we are here!

We had berthed in the main dock in Mumbai which was also shared with the Indian Navy……..

The Southern Naval Command (one of 3 such commands) is based here, which explains why there are more ships on show here than when I last sailed out from Portsmouth to France!

Mumbai dock seemed very busy when we were there……………. 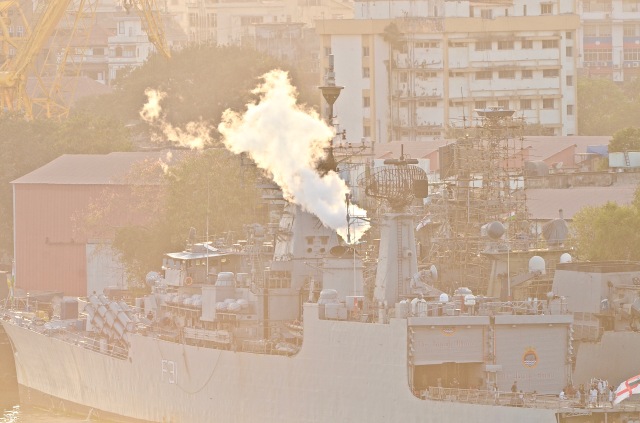 Frigates letting of a bit of steam…………. 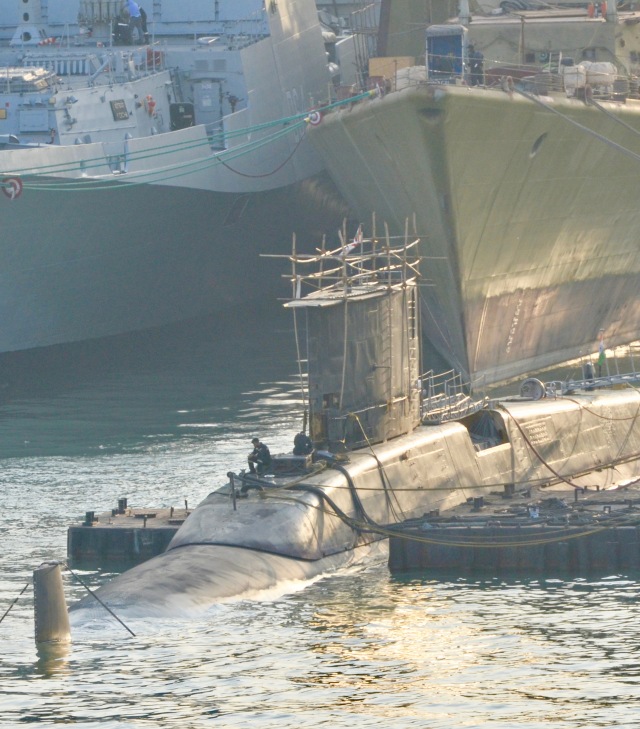 Taking a break whilst refitting a submarine!

From our ship we can look over the top of the navy ships to see the skyline of the city in the distance.

The building in the foreground is what’s left of the slowly crumbling ocean terminal which is now being rebuilt……….

We were in Mumbai quite early in the day so we were able to experience a big city rush hour…….. 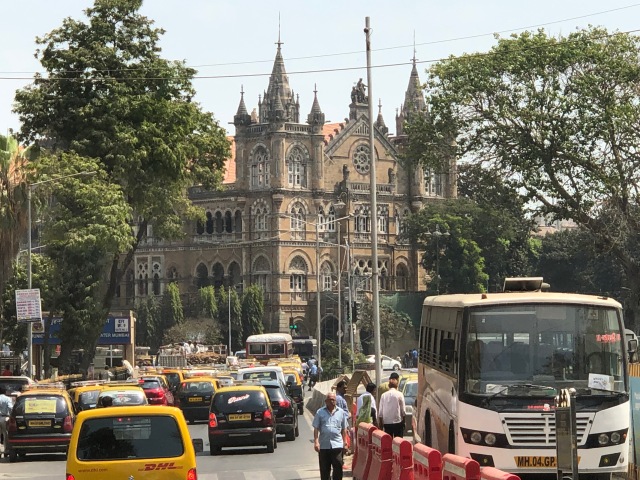 This the Chhatrapati Shivaji station, formally known as the Victoria terminus. This station was built in 1887 and is now a World Heritage site and is considered by many to be the most beautiful railway station in the world.

There is no easy way to get around Mumbai and you certainly have to be blessed with patience if you want to drive!

The bus lanes were very few and far between.  The bus pictured above is a luxury bus, as at least it has 1/2 windows! But then again with the high temperatures that they experience here, no windows at all wouldn’t really be a problem!

This is the Gateway of India built to commemorate the visit of King George V and Queen Mary in 1911 (which is when the foundation stone was laid – the actual building wasn’t completed until 1924).  This arch was used afterwards as a symbolic ceremonial entrance to India for Viceroys and the new Governors of Bombay. 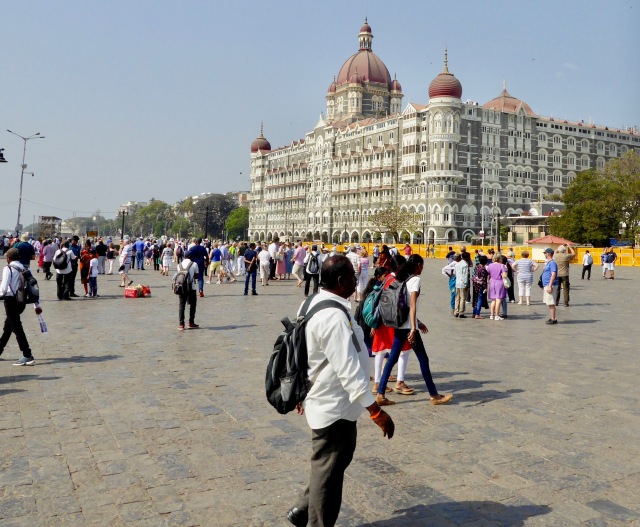 This is the Taj Mahal Palace hotel which is just across the road from the Gateway of India. It first opened its doors to guests on 16 December 1903.  It is widely believed that Jamsetji Tata (Tata Steel) decided to build the hotel after he was refused entry to one of the city’s grand hotels of the time, Watson’s Hotel, as it was restricted to “whites only”.

Mad dos and Englishmen go out in the midday sun………so they say, this one was just looking for a bit of shade! 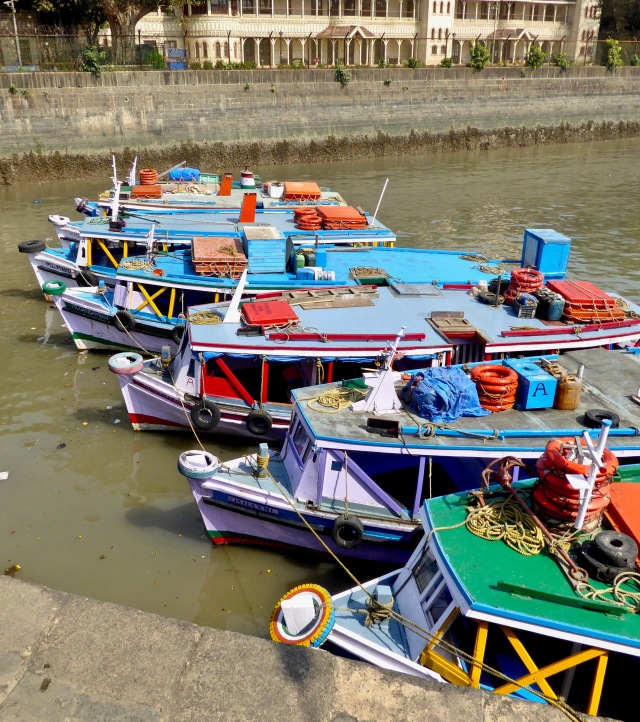 These colourful ferry boats are just some of many waiting to take passengers to Elephanta Island to see the caves. The caves are rock-cut temples dating back to the second century BC.  This is one UNESCO World Heritage site that we didn’t get to visit as we just didn’t have the time. Next year’s cruise will spend 2 days in Mumbai as there is just so much to see, and this would have definitely been on our list of things to see. Maybe next time! 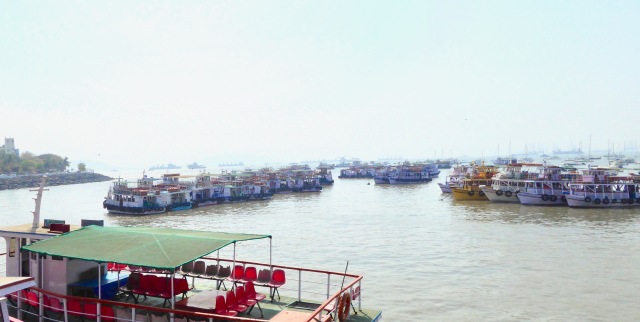 When you see the amount of tourist ferry boats you get a feel for how important a place Elephanta island is!

On the way to our next stop I saw this bike parked beside the road, you certainly need nerves of steel to cope with the busy city traffic and carry 20dz eggs on the back of your bike!

Next stop Churchgate station, to see the dabbwalas in action as they move the 1,000s of tiffin lunchboxes each day. 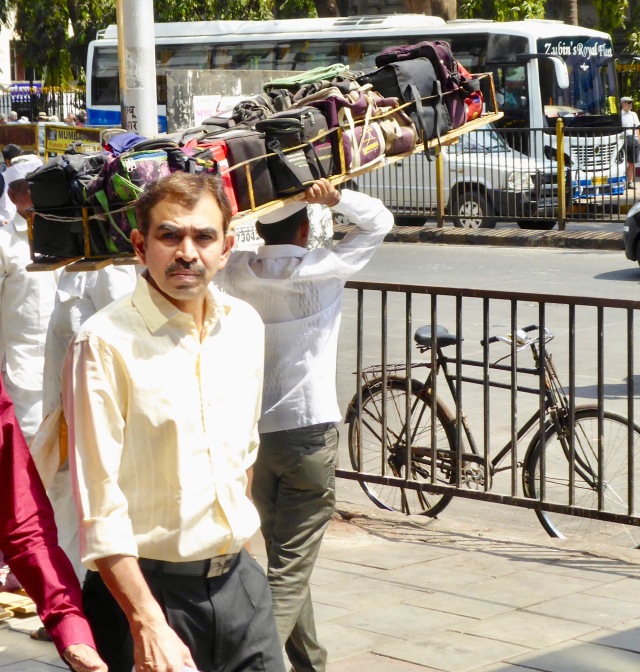 The tiffin lunchbox is a great idea.  It’s a homemade lunch, delivered to office workers who can’t go home for their midday meal, which formed the beginning of the humble lunch box.

Also known as dabbas, the delivered lunches come in large circular metal tins that more closely resemble small milk pails. They’re often made by family at home, which is not only to avoid expensive eateries, but because many prefer what they’re used to and often there’s a fear of getting ill from other food. Each dabba comes in two, three or four tiers; the bottom is the largest, with rice, while the others include a curry, a side of vegetables, dal and flatbreads and a dessert.

Just as the Indian railways are insatiably busy and incredibly complex, so is the dabba’s delivery system, ferrying out an estimated 80 million lunches a year. And no better example of this intricate system shines through than in Mumbai.

The delivery system uses dabbawalas – the people who deliver the pails – which literally translates to “one who carries a box”. They’re identified by their white kurta (smock style) uniforms, topped off with the traditional Gandhi cap, and will often ride bicycles.

Most of the dabbawalas even come from the same village, Pune, which is just over two hours south-east of Mumbai.

Dabbawalas collect the tiffins from the people who made them at around 10am (often a wife or mother – as India still adheres to gendered roles), where anything up to 30 will be taken on crates and via bicycles through the busy roads to the nearest train station. They are labelled using a system of symbols and colours, denoting where the tiffin is picked up, which station it will be sent to, and the final address of the owner, all hand painted. The tiffins then travel on the city’s train network where at the other end the local dabbawalas pick them up for the last leg of the journey – the lunchtime delivery, which is never late.

Every day in India alone, some 200,000 dabbas are moved by an estimated 5,000 dabbawalas. It’s a system of mathematics, carried out by people who are most likely illiterate, but who have made the process an efficient breeze for the last 127 years, feeding thousands daily. But it’s not a simple operation.

And what’s the financial cost for this time-saving exercise? Around 450 rupees a month (£5.40) – depending on distance. That’s about the average for a sandwich and a packet of crisps in a city, let alone a delivered meal. And on the other end of the deal, each dabbawala is self-employed and paid the same, around 8,000 rupees a month, translating to about £95. It’s seen as a job for life, where the workers live by the philosophy, “Anna daan is maha daan”, translating to “donating food is the best charity”. 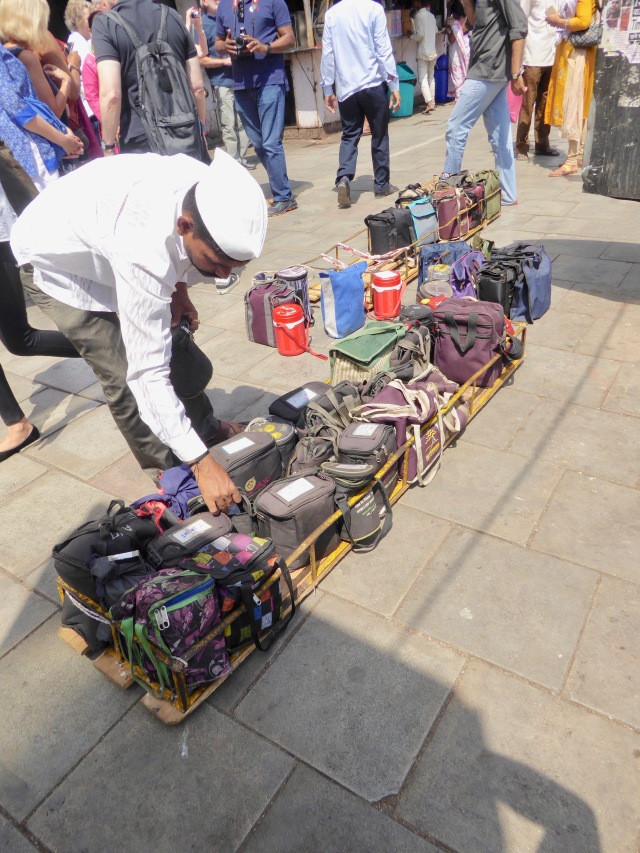 And so efficient is the system that the president of the Mumbai Tiffinmen’s Association claims that dabbawalas only make a mistake once in every six millions deliveries, translating to about one going missing every other month. It works so well that it has been studied by Harvard Business School and is reportedly the envy of FedEx.

(Just to let you all know I took the pictures, but  I did copy some of the text from an article in the Independent!) 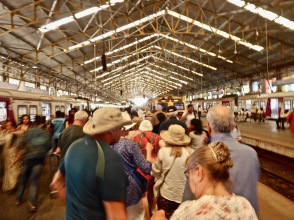 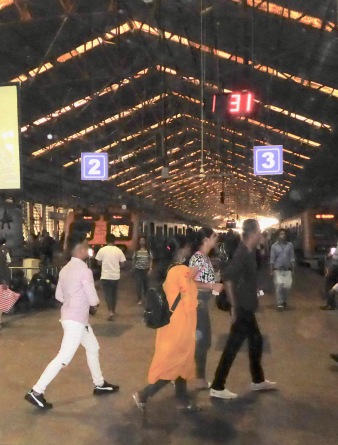 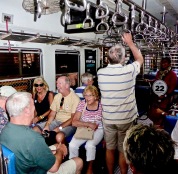 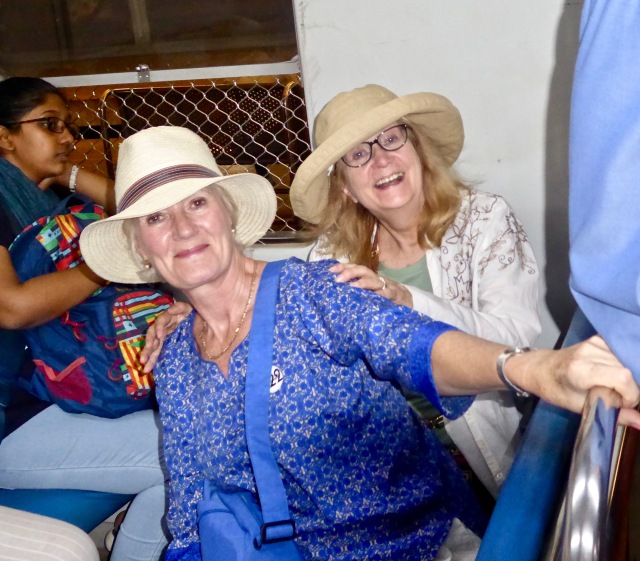 After seeing the dabbwallas in action it was our turn for a ride on the train…………. 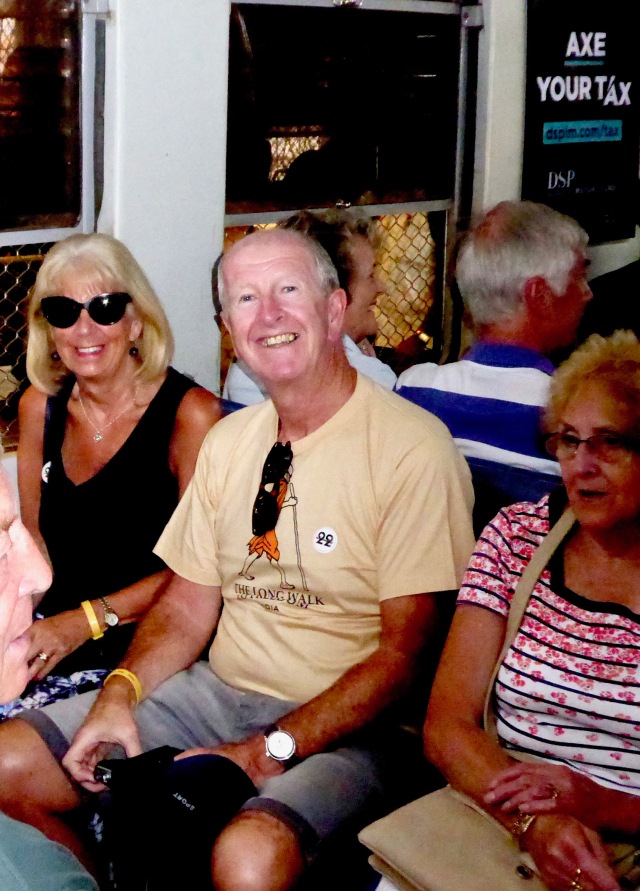 Mike and Sue were really excited! As was Bruce Forsyth!

The train was nearly empty but hanging on seemed to be the thing to do! 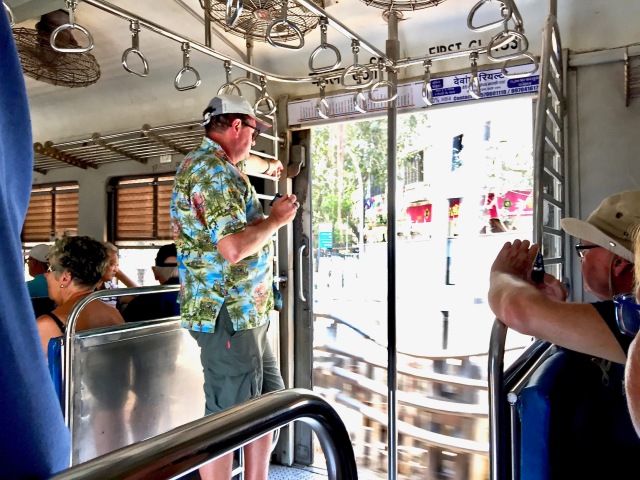 Next stop the Dhobi Ghat

Dhobi Ghat is an open air laundromat in Mumbai, India. The washers, known as dhobis, work in the open to clean clothes and linens from Mumbai’s hotels and hospitals. It was constructed in 1890. 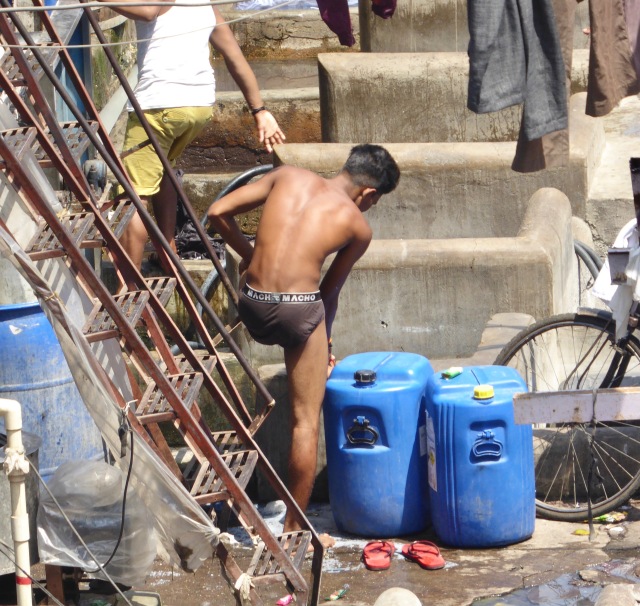 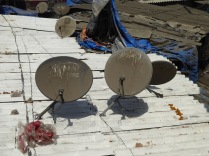 Outside the Dhobi Ghat it was time for some more serious bartering……..

Good news, a deal has been struck……

Let’s see if Jane can do as well! 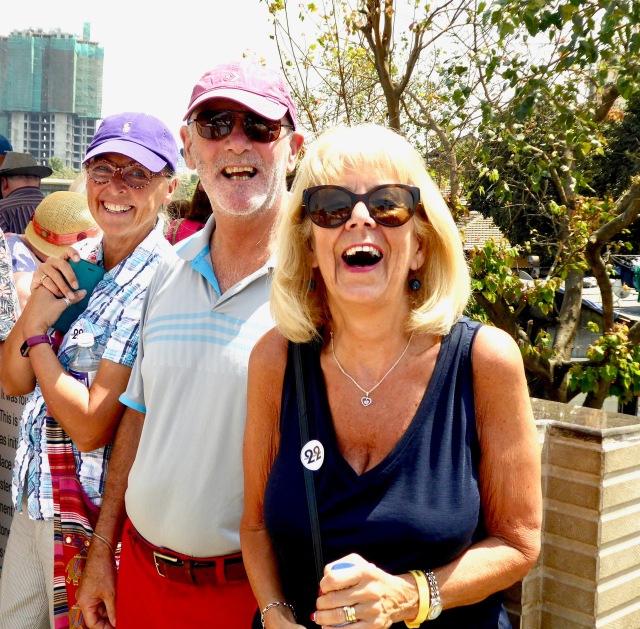 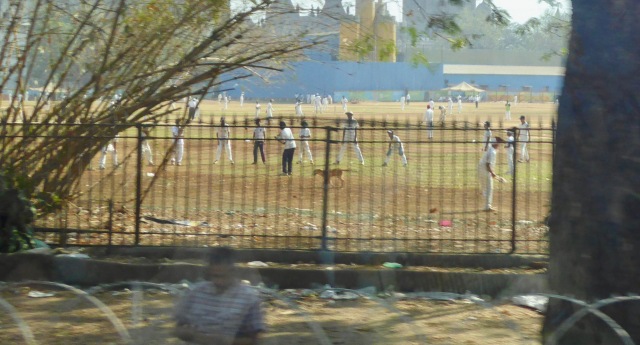 Wherever we travelled in this country, let alone this city, whenever there was an opportunity or the space, a game of cricket was being played! 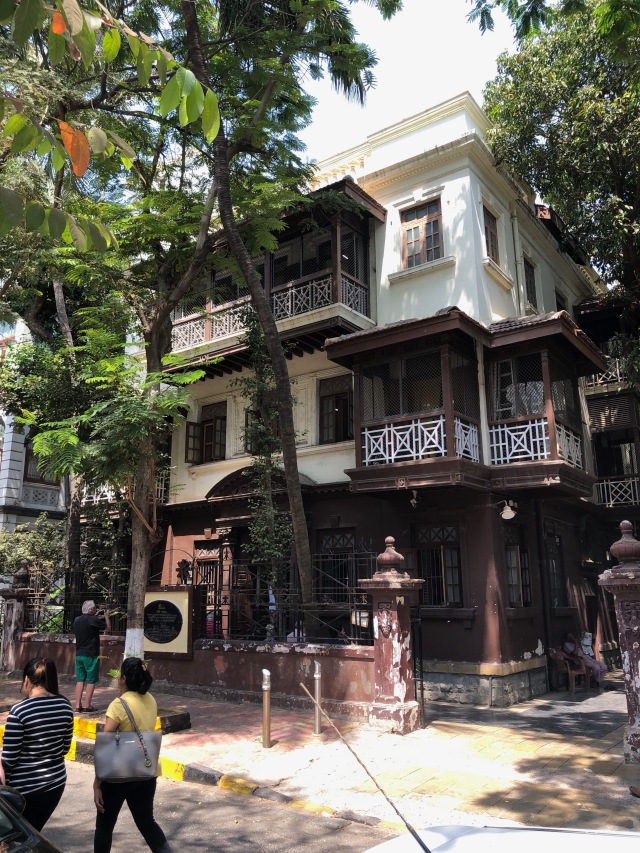 Next stop on our whistle-stop tour of Mumbai was Gandhi’s house.

A very interesting place to visit telling the story of his life. He lived a very spartan life as can be seen by his bedroom!

I mentioned earlier about how the road was delivered for lunch, the Amazon delivery service here is not quite what it is at home!

So as the sun sets on a really fascinating day……

We sail out of the truly lively city……..

With time to reflect on our day!