Spain for a Day

Posted on March 19, 2020 by ianandjanesadventurebeforedementia

It was an early start for us to catch the ferry from Portsmouth to Santander in sunny Spain. We had been a little concerned about the coronavirus and its implications on our holiday, so we had regularly checked the FCO’s latest travel advice and we were good to go………or so we thought! 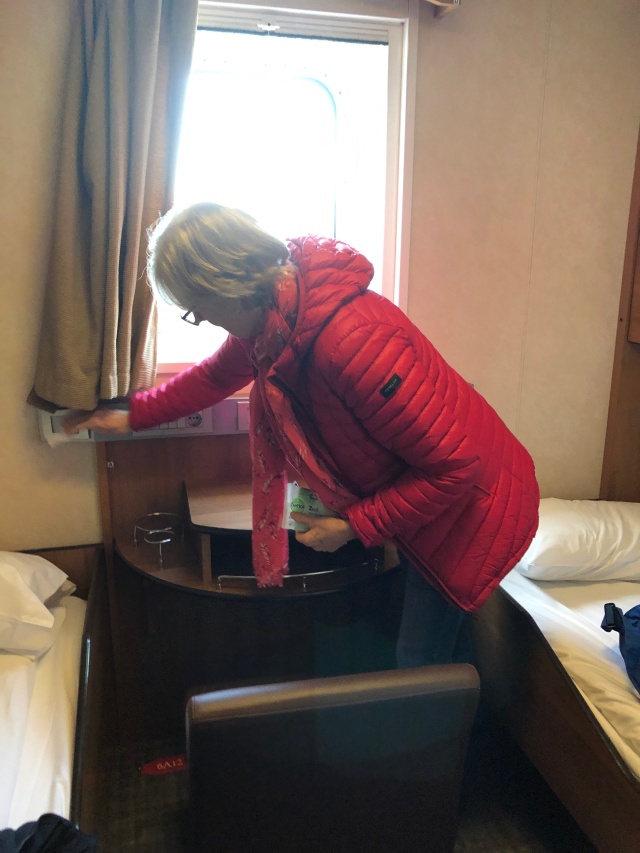 As soon as we were on board and in our cabin Jane got the antiseptic wipes out and gave our bedroom a thorough clean, this is not a time to take any unnecessary risks! 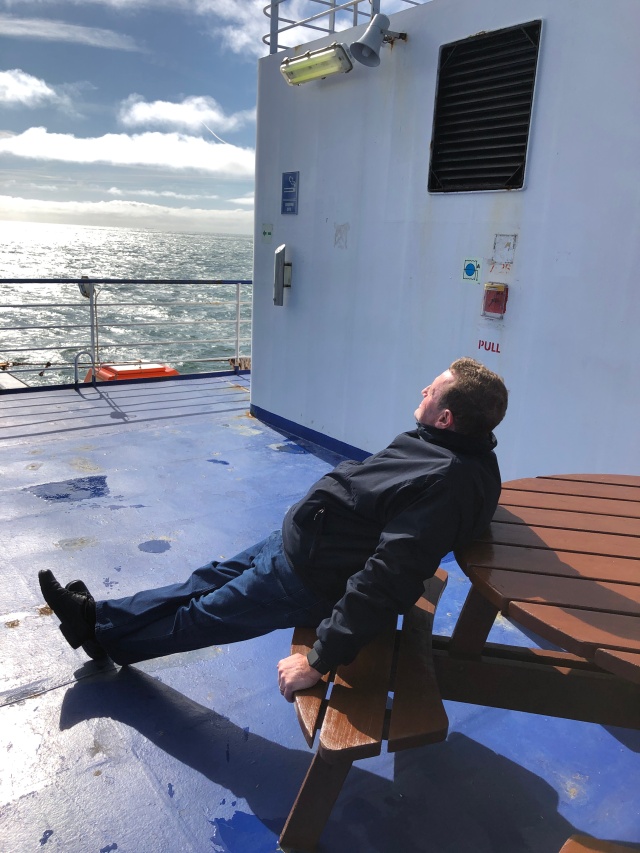 I thought the best way to avoid any contamination was to sit on deck and take in some sun. Whilst I was out getting a tan everything in Spain was changing quite dramatically and extremely fast. The FCO’s advice changed from avoid the 3 infected regions, to “only essential travel allowed”. The ship was full of people trying to get any information on what we should do next and this was pretty difficult to get hold of. Rumours of all campsites having to close, along with all restaurants and bars, were abound! We also heard that everyone was told to stay indoors and not only should they not drive anywhere, they were not even allowed to walk the streets! 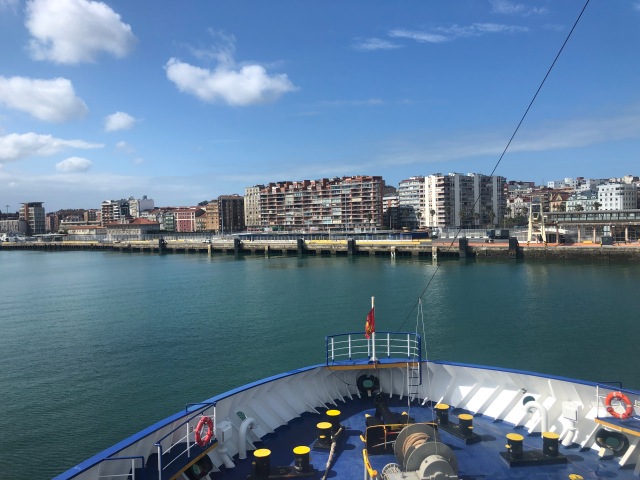 So as sunny Santander came into sight our plans had changed from a relaxing month in the sun to how are we going to get back.  We were lucky to be one of the first cars off the ferry so our immediate plan was to try to get back on the same ferry………..no luck there ,as many people had travelled up from the Costas overnight and the ferry was full.  Some kind passenger that we had been speaking to on the crossing pointed out a booth where they were taking bookings for upcoming sailings. We were lucky enough to secure the last space for the caravan and the last cabin on the Tuesday sailing from Bilbao, so all we had to do was find somewhere to stay for two nights. 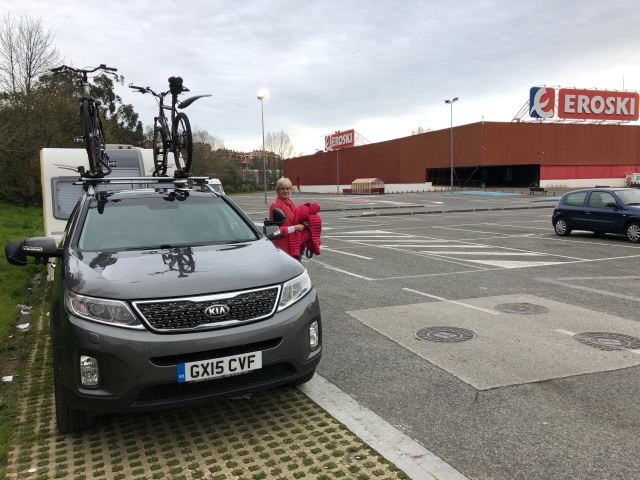 This was easier said than done.  After a few false starts and a few failed attempts to solicit a bit of sympathy from campsite owners, we settled for the less than salubrious surroundings of the car park at the Eroski supermarket. 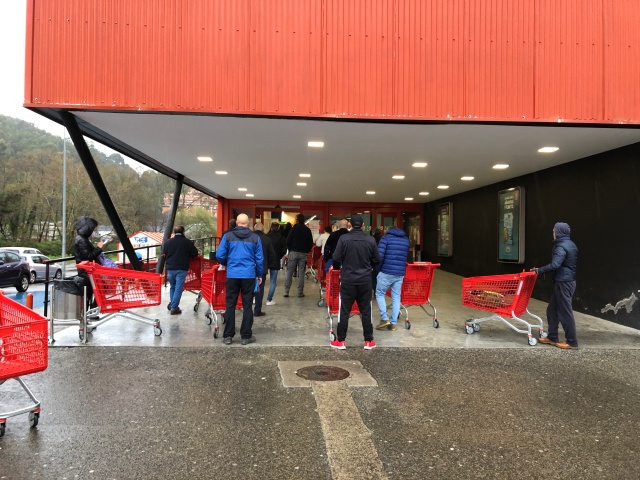 This did have one small advantage as I was amongst the first in the shop when it opened.  We were all given plastic gloves as we entered the store, and were only let in in phases. 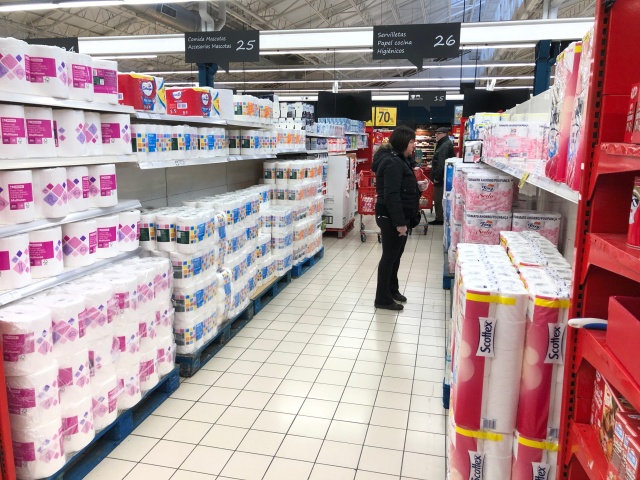 Once inside it was an Aladin’s cave of toilet rolls!  Even though that’s not what I went in for I bought a pack for gifts for when we eventually got back to the U.K.!! 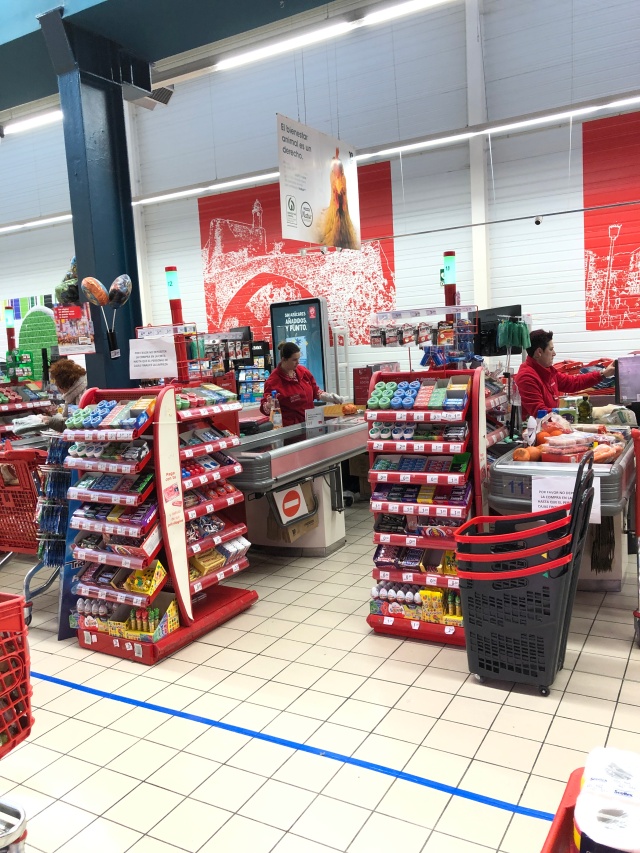 After every transaction at the till every checkout was thoroughly cleaned before you were allowed across the blue line to pay for your own basket of goods. 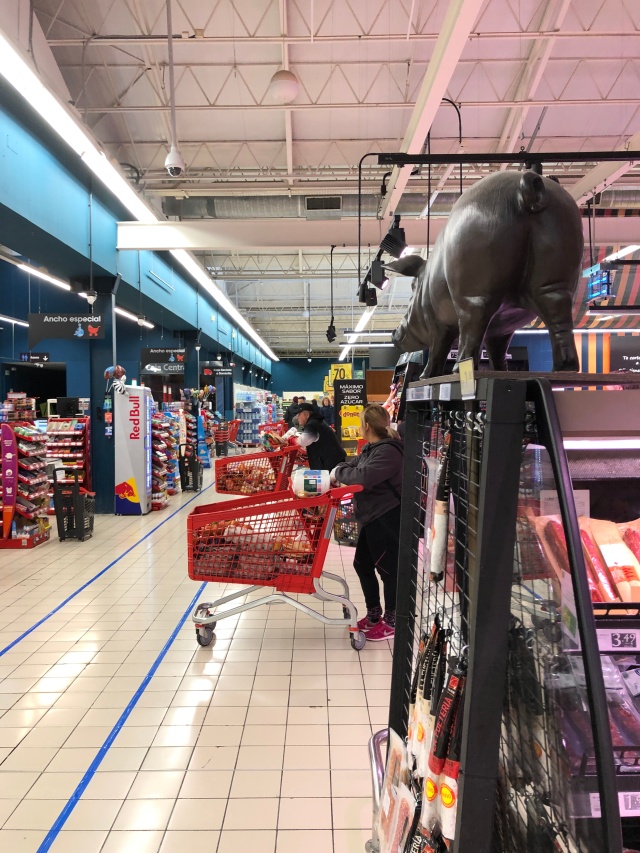 Jane stayed in the caravan whilst I rounded up the essentials to help us survive our 36 hours in Spain. Top of her list was wine, well mine too if it comes to that, crisps, biscuits, chocolate, bread and milk were amongst the staples to keep us going! 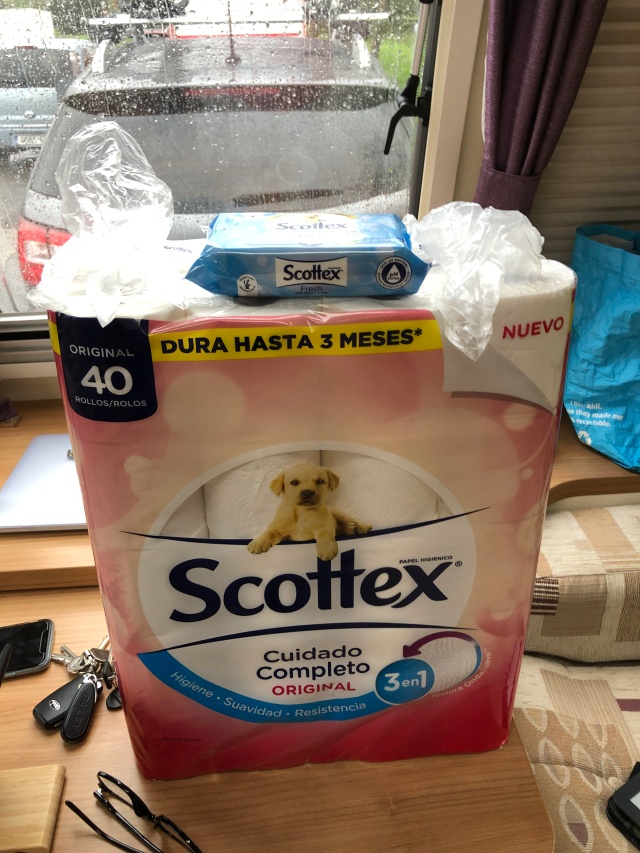 I was a little worried at buying these as the instruction were all in Spanish but Jane found a website with an English translation so that was alright! 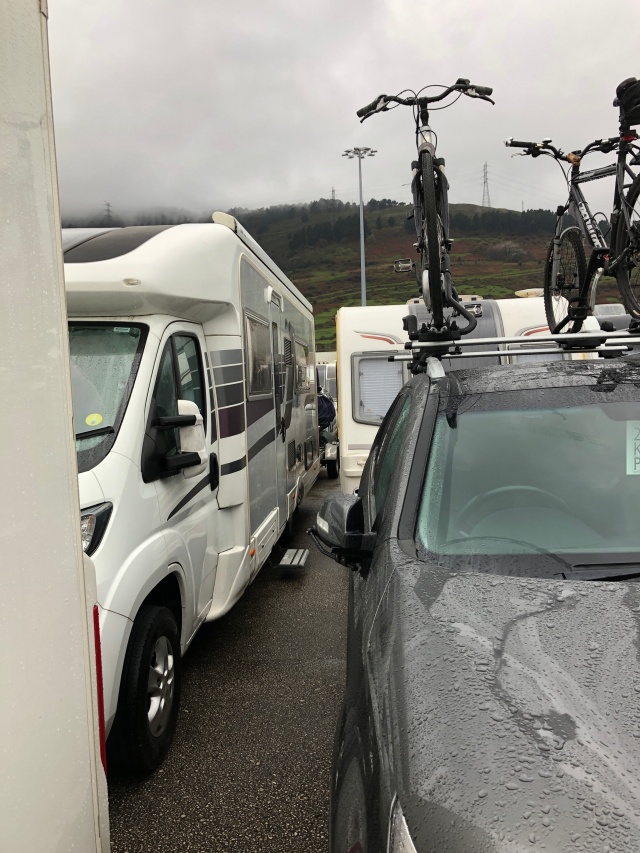 Our next night was spent on the dock of the bay, its sounds far more appealing when Ottis Redding sings about it. Cold, wet and windy and packed in like sardines was the reality! During the night we heard a lot of shouting and screaming…….and in the morning were told that an Albanian had tried to get into next doors caravan under the cover of darkness!  He was chased by the owner wielding a baseball bat and wearing his boxers! 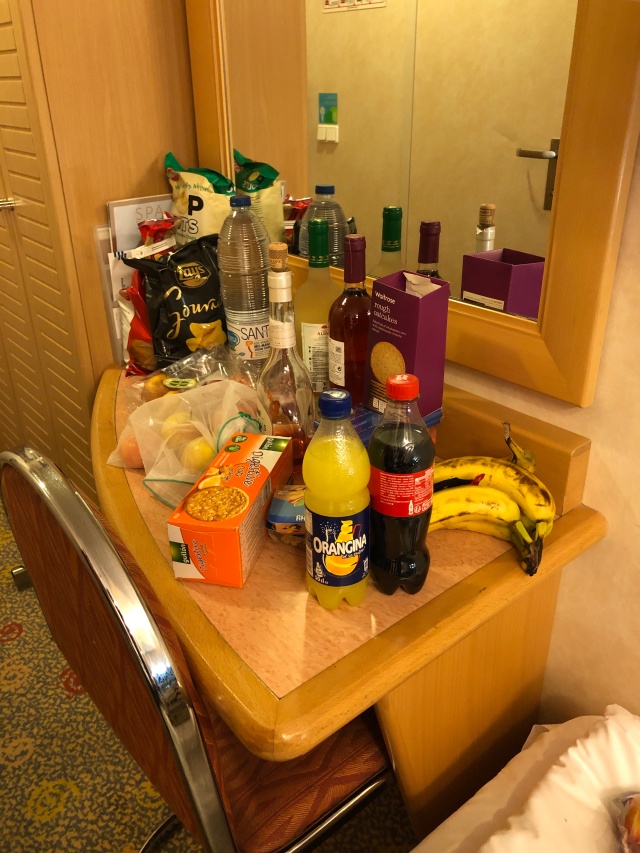 At last we were on board and ready to come home, but we were informed that we had to stay in our cabins for the duration of the crossing……and then I heard the dreaded words “all restaurants and bars closed!”  Jane’s immediate reaction was to send me back to the caravan to get some travel essentials!

The crossing passed with very little incident, and the crew were marvellous bringing us 3 meals during the journey…..you can tell what’s important to me! 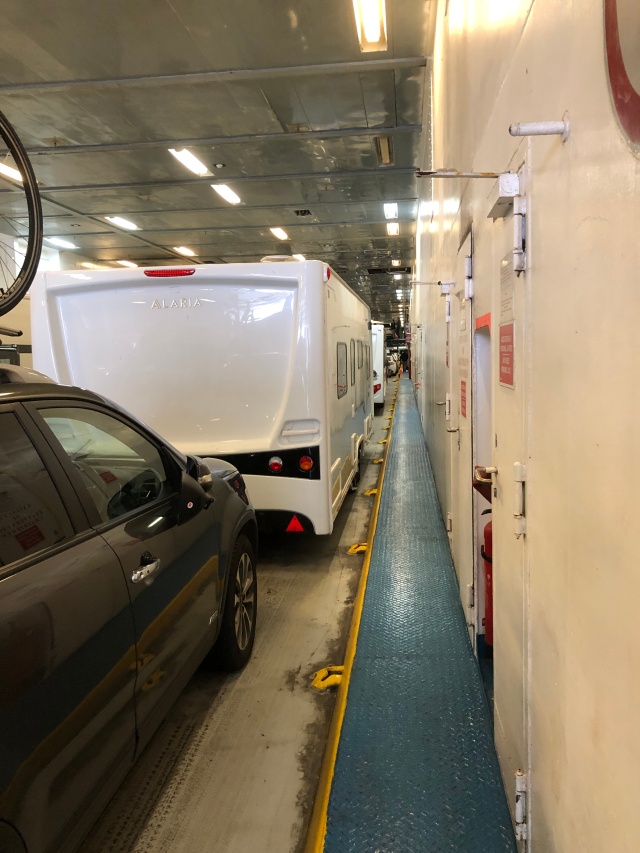 Time to get in to the car and head home. Charlotte had asked us to stop by at Sainsbury’s to pick up some food for the potential lock down! 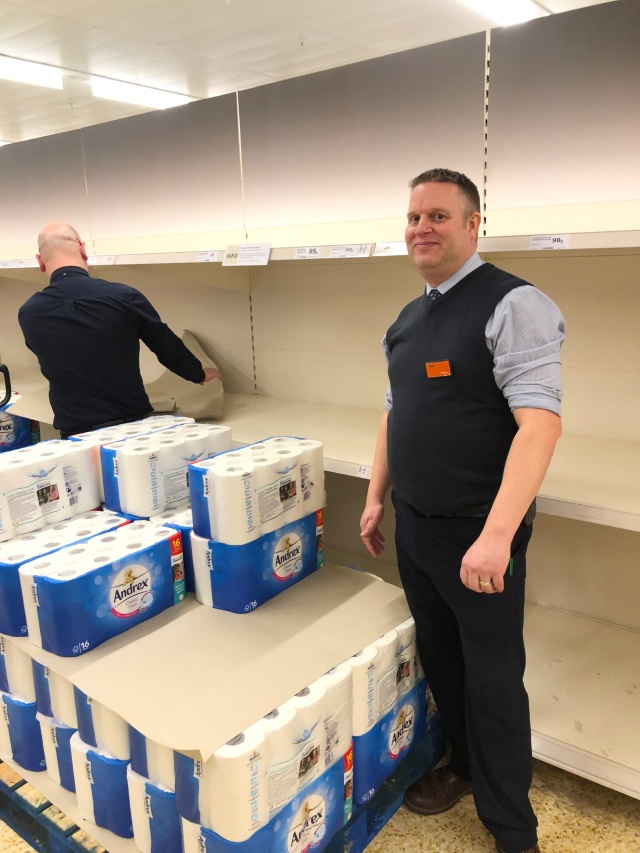 Whilst in the store I met up with an old work colleague from my days running the Food Barn, when he used help run Batleys cash and carry.  Paul is now part of the management team of the Sainsburys at Hedge End and today he was making sure that there was no panic buying on the toilet rolls, whilst every single checkout was going flat out! 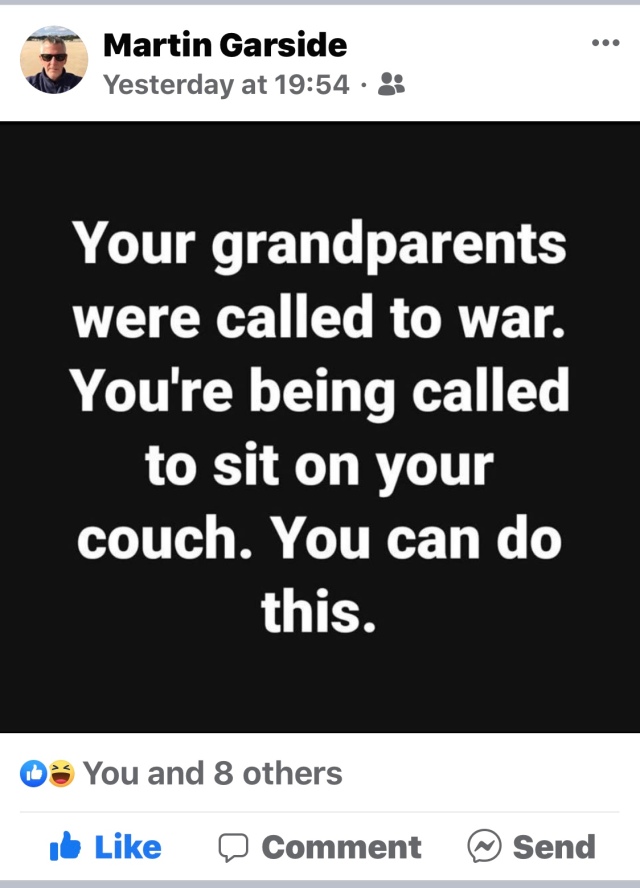 I thought I would share a post to make you smile during this most serious of times.

I was hoping my blog was going to feature another trip to Spain for some winter sunshine……….now it’s going to be all about trying to stay sane whilst

1 Response to Spain for a Day