Posted on June 12, 2018 by ianandjanesadventurebeforedementia

06.45am……….. What a great time to start out on our marathon walk ( it was more than a marathon as it turned out!) Having read several guide books and a few websites the general distance given was between 24 and 26 miles, you would have thought that in this day and age that we could be a bit more accurate! As it turned out our pedometers and sat nav on our phones registered 28.7 miles…………. 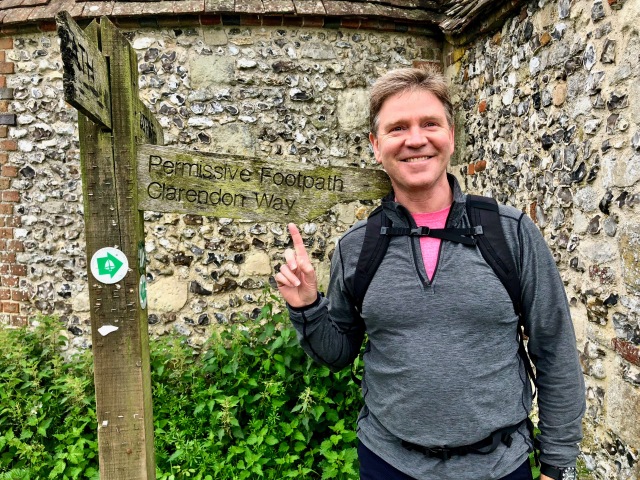 When you read the guide books a little more fully you find out that they suggest that this walk should be undertaken over 2 days…………note to self, read these books in a bit more depth!   It was very helpful that Mr Muddiman was able to find some of the footpath signs to ensure we were heading in the right  direction! 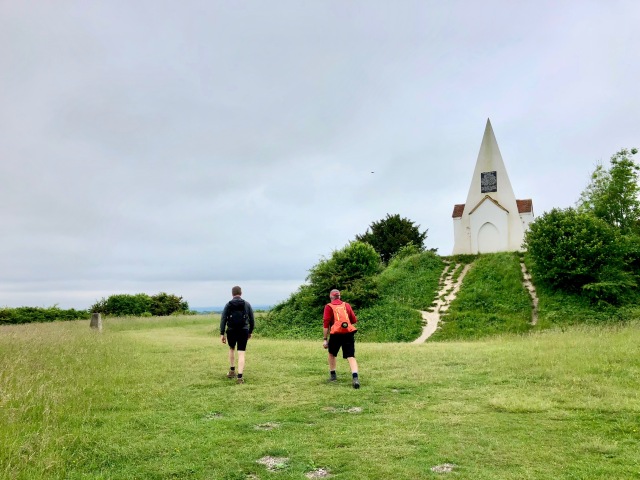 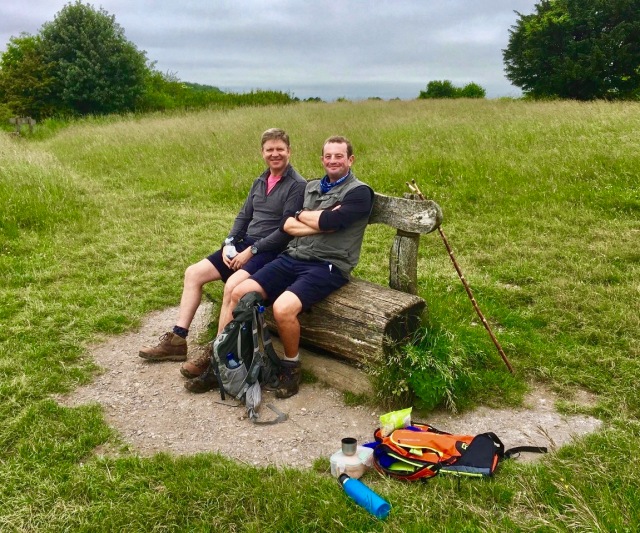 It was only 9am but we all thought it prudent to eat some lunch, it’s never too early for  pork pie………I only wish I had remembered to take it out of the fridge………..Mr M had one, but he would only let me look at it and discuss how much he was going to enjoy it when the time came!

It was perhaps a little surprising that there were so few people out and about until Mr Pullen pointed out that it was a Tuesday and that most people were at work…..oh the joy of retirement!

A picture of the two Steves together at Farley Mount…….Mr M trying his best to hold his stomach in……. 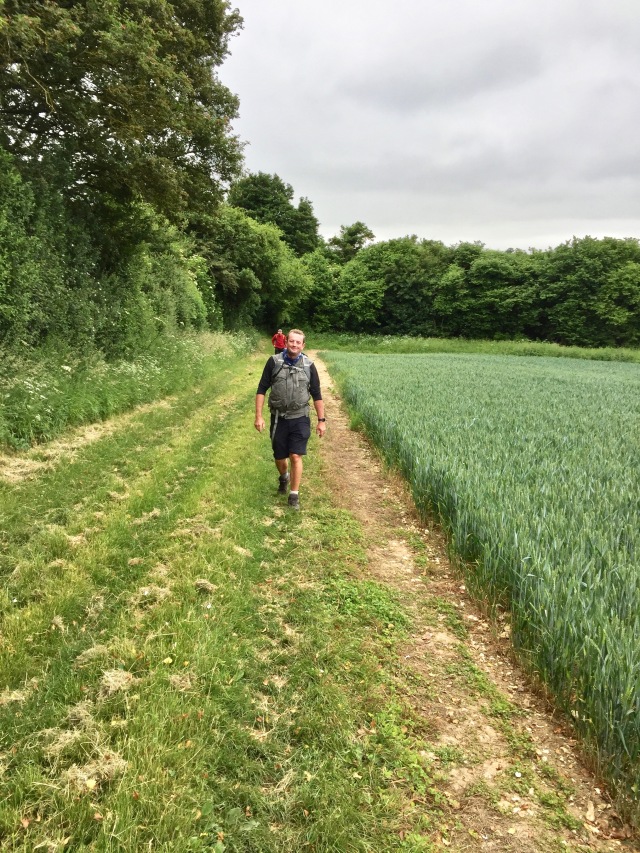 Here is a picture of me failing miserably to hold mine in, I think its the straps on the rucksack that exaggerate the belly! 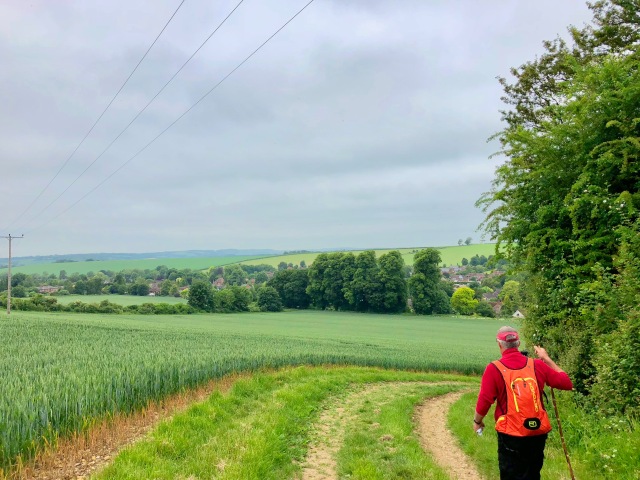 Nearly at Kings Somborne, time for a coffee and some proper lunch………

The two Steves were trying to persuade me that opening another shop was the way forward………….I told them politely what I thought of that idea! 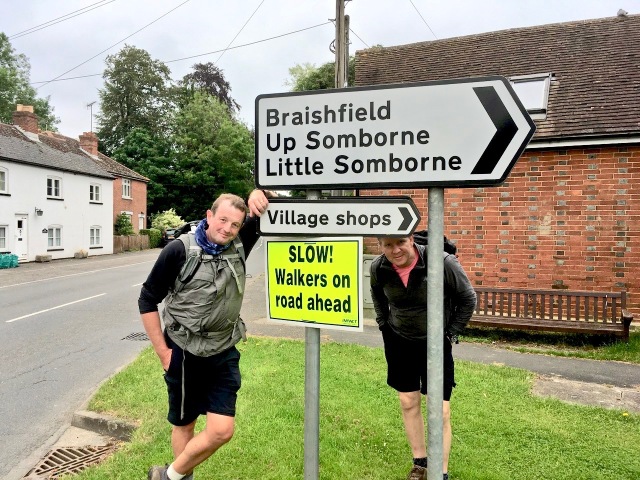 We were surprised that they had put up road signs to warn of our arrival, they needn’t have bothered because actually we were quite fast!  We arrived at the pub in Kings Somborne at 11.30 only to find that it didn’t open until 12.00.  However the young girl behind the bar took pity on us and made us a cup of coffee, and then told us that the next pub en route that served food was another hour and half’s walk away at Broughton…..Mr M promptly googled the pubs there and was slightly cheered at the fact that they sold ham, egg and chips!

Off we set at a slightly quicker pace to ensure that we got there before closing time, only pausing briefly for Mr M to gaze wistfully into the river test and dream of his lunch! 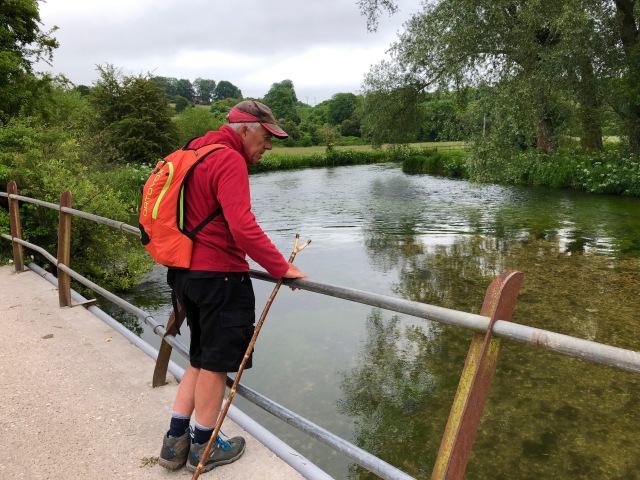 But he was talked out of it as we were hungry!

How much further to the pub? 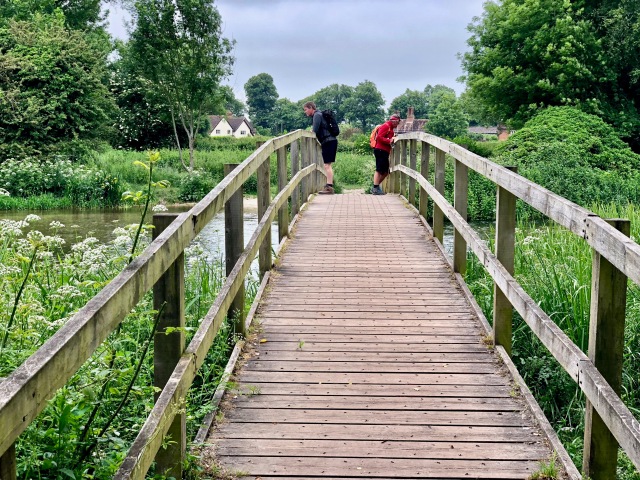 I hope this is not a bridge too far I’m starving !

Well there’s a fancy way to serve ham, egg and chips……..It was lovely and very welcoming! Then came the shock, we were told that we were not half way as we had thought, having walked 13 miles at this point! The barmaid, with some relish, told us we had at least 15 more miles to go!

By the time we saw this sign we couldn’t have been going much slower, so the cats were safe. At this point in the journey we were in Winterslow, close to where my Uncle Keith and Auntie Gay live, but we were all so tired that we didn’t want to deviate more than 6 inches from our route and decided to carry on through the pain and not pop in for a coffee! 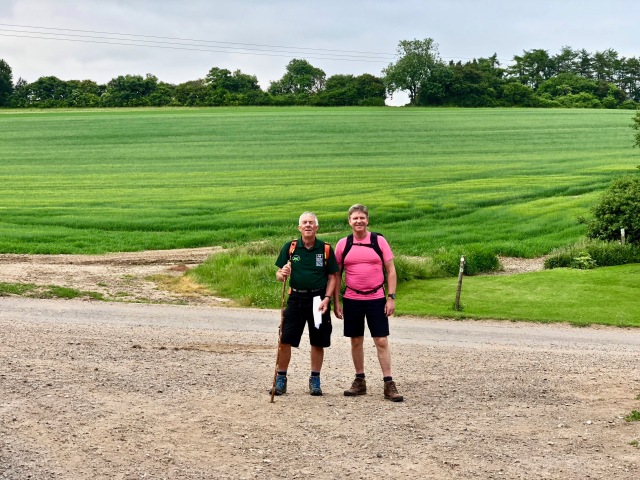 After much discussion we all decided it was probably Salisbury Cathedral that we could see in the distance!

A quick break at Clarendon Palace before the triumphant march in to the city! 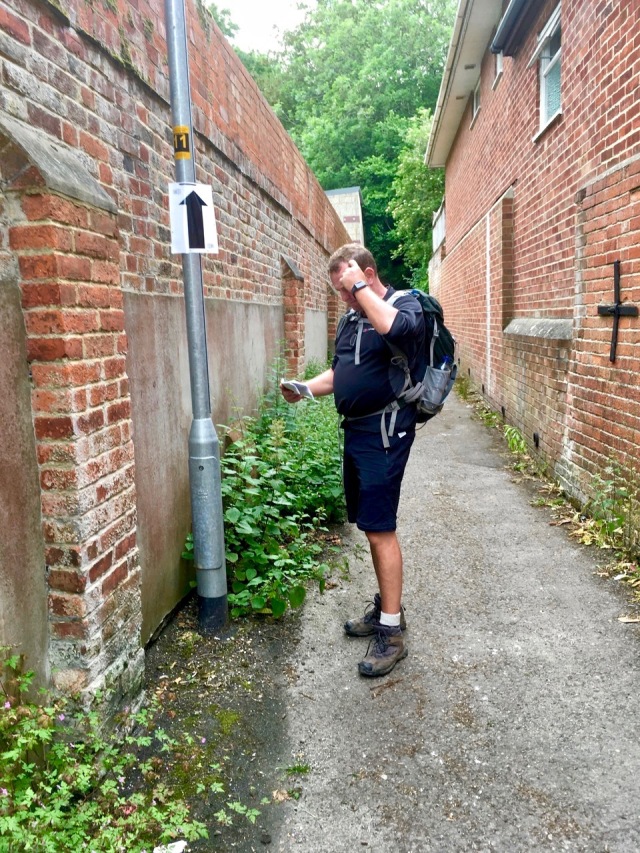 So close but yet so far, it must be here somewhere, if only the map was a bit more explicit! 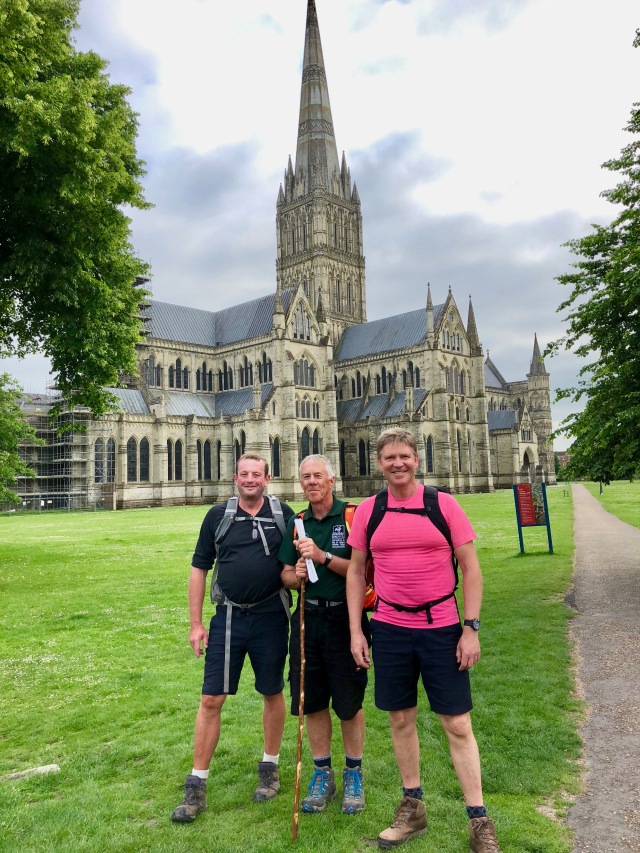 Jane was waiting by the Cathedral to drive us back home, she said that we looked like 3 old codgers as we limped in to the car………but she did say that she was amazed we did it !    It was all remarkably quiet on the journey back, 20 minutes by car 12 hours by foot!     I think I’ll attempt something shorter next time!

1 Response to The Clarendon Way